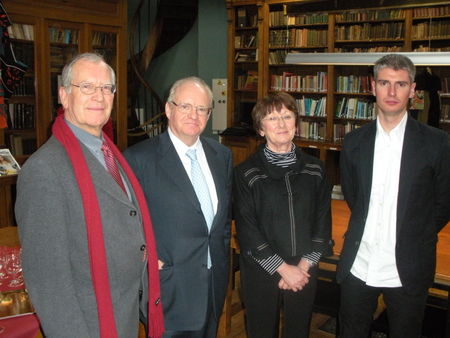 The Theophile Legrand Foundation - Institut de France was created in 2008 by the descendants of Theophile Legrand, who is widely considered to be the father of the development of the textile industry in Fourmies, France.

On Saturday, October 24, 2009 at 4pm, two prizes will be awarded in the Fourmies Textile and Social life Museum auditorium. These two prizes were established by the Theophile Legrand Foundation – Institut de France and carry a total value of €18,000. The awards will be given to 2 individuals based on originality of design in the area of technical textiles: outfit, fabric or fibre, innovative combinations of materials or new industrial production techniques.

It is an international competition, open to all researchers, PhD or MSc Students. Entry is free. Its goal is to favour innovation, research, creativity, while highlighting both the technical / industrial and mechanical features intrinsic to the textile industry. This competition is also designed to be a stepping stones for those researchers who may some day invent tomorrow’s most advanced fabric.

Based on an initiative by the Théophile Legrand Foundation – Institut de France, this competition is supported by CLUBTEX (a group of textile firms in the North of France) and by the most prestigious schools of textile engineering. The contest is organised by the Ecomusée de l'avesnois and its branch, the Fourmies Textile and Social life Museum. It is a unique museum, set up in a former textile mill. The workshop features an important number of weaving and mill engines, representative of the evolution of the industry from the 19th century to the 1970s. The stories of Théophile Legrand and the city of Fourmies are very closely linked together. Théophile Legrand was born in 1799, and is considered to be the “father” of the city’s industrial development. . In 1825 he built his first textile mill called “la neuve” or “La Filature du Village” in Fourmies, which counted at the time circa 2000 inhabitants. He contributed to the transition from the cotton industry to the wool industry and favoured the use of steam machines as well as the industrialisation of the textile industry. In 1856 he built a new plant in the place name “le Malakoff” close to his first spinnery, which buildings burnt in part in the night of February, 17th 1857.

A visionary, Théophile Legrand convinced dozens of investors to settle in Fourmies. Thanks to its ideal location between Paris and Brussels, the new train running from Calais to Strasbourg in 1869 and its humid climate, the wool industry enjoyed considerable expansion in the 1860s.

At the time of his death, in 1877, Théophile Legrand had 1 700 employees, and more than 30 spinnery mills had been built along the side of the "Helpe mineure" river within 50 years! The population of the city went from 2 000 in 1820 to more than 16 500 in 1891, and in 1875 Fourmies became the first centre for worsted wool in the world, and the second largest city for textile, after the city of Roubaix. The Foundation was created by Christian Cambier, direct descendant of Théophile Legrand. It is chaired by the Chancelor of the “Institut de France” Gabriel de Broglie and has a “common public interest” status. As such is able to raise tax free capital, with a view to raise several thousand euros each year, to be redistributed to NPOs or individuals linked to the works of Théophile Legrand.

In addition to the International Award for Textile Innovation, a comprehensive essay on the achievements of Théophile Legrand has been undertaken by Jean-Louis Chappat, who is also the author of a biography on Léo Lagrange and essays on the tragic events of the 1st May 1891 that took place in Fourmies. The Foundation will also participate in various initiatives designed to protect the cultural and historical heritage of the region, particularly an initiative regarding industrialisation in the North Region of France (the regions of Fourmies and the Avesnois). In 2008, the Foundation created two awards: one to reward the best students of the “Lycée Privé Théophile Legrand” in Louvroil, and another to reward the best international textile innovation. At the initiative of the Théophile Legrand Foundation – Institut de France, two prizes will be awarded each year. They will reward two individuals for their original design in the area of technical textile: outfit, fabric or fibre, innovative combinations of materials or new industrial production techniques.

Its goal is to favour innovation, research, creativity, while highlighting both the technical / industrial and mechanical features intrinsic to the textile industry.

To be eligible, applications should highlight the following:

A prototype can be presented during the awards ceremony.

Applications should be either in French or in English, and must be sent by September 9, 2009 to :

Winners will be selected by a jury composed of Foundation Representatives, Clubtex, the Ecomusée de l'avesnois and experts in textile innovation and research.

Participation implies acceptance of these rules, as well as understanding of the selection criteria as they are presented in Article 2. The jury’s verdict is irrevocable.

Each candidate must confirm his attendance of the Awards ceremony in Fourmies. The winners will be authorised to claim his or her award, which is intended for the promotion of their project. They will have to agree to mention, on all communications (in any form) about their project, “Lauréat de la Fondation Théophile Legrand – Institut de France”, for the duration of one year.

Awards for 2009 will be given on Saturday, October 24, 2009 at 4pm, in the auditorium of the Textile and Social life Museum. During the ceremony, winners will have the opportunity to present their project.

Candidates guarantee the accuracy of their results and might have to produce evidence. There may be media coverage of the competition; particularly in the written press. Winners hereby authorise the Théophile Legrand Foundation – Institut de France to release the progress and results of their project. They will need to provide a specific list of elements and / or documents they wish to keep confidential.